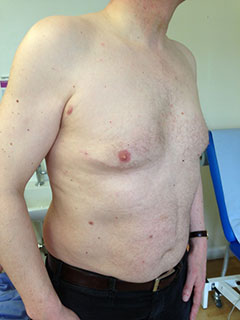 Out of the blue I was diagnosed in June 2011, aged 55, with a badly leaking mitral valve. The symptoms were fairly slight, but surgery was necessary and couldn’t be put off too long. My cardiologist had recently heard of Paul Modi’s pioneering work at LHCH and referred me to him. The operation had to be fitted in around my work commitments, and eventually took place in January 2012. My wife and I had a valuable session with Paul Modi several weeks in advance, in which he gained our complete confidence. He explained very clearly everything involved in the minimally invasive procedure he proposed. I would be only the ninth patient to enjoy the privilege. The reduced recovery period and limited scarring were particularly attractive, but also the improved access and approach to the relevant side of the heart that this keyhole technique affords.

What was the operation like? I don’t remember much, of course, but it went very smoothly. I was back on the ward next day, and up and about the day after that. Apart from pain in the shoulder from the way I had to be positioned during the operation, there was merely tenderness in the entry sites which at least stopped me feeling too much of a fraud in making such a rapid recovery from serious open heart surgery. I was allowed home four days after the operation. The only set back came a week or so after my initial discharge home, when I developed an arrhythmia which necessitated re-admission overnight for monitoring. It resolved itself quickly with a change in medication. The care and nursing on this occasion were superb again, overseen personally by Paul Modi.

Since then I haven’t looked back. I was fortunate to be granted generous sick leave at my employer’s insistence to ensure that I was 100% recovered before returning to a very demanding job but within only a few weeks of the operation I was able to walk miles each day, uphill as well as on the flat. A few months later my wife and I enjoyed a strenuous hill walking holiday covering 70 miles in the week. I have had no further problems, and a recent echocardiogram has confirmed that the repair is perfect. I am left with virtually no visible scarring at all, a great advantage over traditional surgery not just cosmetically but because of the far shorter recovery period.

I cannot praise enough the excellence of the service provided by Paul Modi and his team at LHCH. We are fortunate indeed in the North West to have such wonderful expertise.