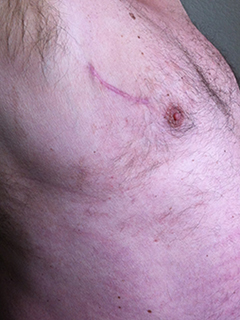 I was advised in late 2011 that my heart condition had suddenly become more acute being described as “Moderate to severe Mitral Valve regurgitation” – this diagnosis did start to concern me but it was not until March 2012 whilst watching the Australian Grand Prix that I really did become worried. Clearly the tension of watching Jenson Button streak past Lewis Hamilton was too much! Perhaps rather foolishly on reflection I elected to drive to Glan Clwyd Hospital where I was immediately placed into the resus section of the A & E department. The pain in my chest was increasing by the minute and my heart rate was bouncing around between 60 and 160 beats a minute … this was the point at which I KNEW I WAS IN TROUBLE and needed help fast! A short stay in hospital was followed by a coronary angiogram in order to ascertain whether or not I also had a problem with the arteries to my heart – fortunately these were fine.

There then followed a period where I researched heavily the whole subject of “Mitral Valve” repair and / or replacement. After intensive research it became very apparent that whilst the more normal approach was a “Sternotomy” (a procedure which I most definitely DID NOT RELISH) there was an alternative procedure using minimally invasive techniques through a small incision on the right-hand side of the chest. Further investigation showed that there was only a few surgeons with significant experience with this procedure in the UK one of whom, Mr Paul Modi, was based at the Liverpool Heart and Chest Hospital.

An appointment made via my consultant at Glan Clwyd Hospital in North Wales quickly had me sitting in front of Paul who immediately tried to reassure me as to the “safety” of the procedure concerned. I remember asking all manner of questions including the one which was perhaps the most searching “Would you be prepared to carry out this same surgery on your Father if required” Temporary comfort was provided in his definitive answer “YES”. There then followed a few months wait whilst I endeavoured and actually succeeded in dropping some 15kgs in weight.

However, as the date of the surgery approached I became ever more apprehensive; this was to be relatively “pioneering” surgery and all those nervous fears and concerns were raised yet again. Whilst clearly Paul Modi did his best to allay those fears, as did his anaesthetist, Dr Ken Palmer, I was indeed absolutely terrified! October 12th, the morning of the surgery, arrived and at around 7am Ken Palmer came to see me to discuss with me his side of the procedure which was in essence to ensure that I remained asleep (a damn good idea in itself) throughout the entire operation but also to administer the “premedication”. I explained again that just how terrified I was to which he responded “No problem, I will give you something which will knock out an Elephant”. I am not sure if that was a reference to my own bulk or not but the reality is THAT IT DID! I knew absolutely nothing for the next 24 hours!

I became aware of my surroundings on the Critical Care Unit the next morning and whilst it would be fair to say I was not “at my best” the discomfort was at least controlled. The surgery had been 100% successful and aside from being connected to all manner of equipment I felt, in very relative terms, OK. The pain had been managed via a paravertebral catheter. The staff on the Unit were very attentive but insistent upon what appeared to me to be constantly turning me over and making me breath deeply. I found that the Morphine provided did not suit me and having found at my earlier hospitalisation in Glan Clwyd just how effective intravenous Paracetamol was I requested this alternative pain relief. I was amazed at just how effective medication normally taken in tablet form was at controlling pain. Within another 24 hours I was feeling much better and was transferred to Oak Ward and whilst YES I was still a little “uncomfortable” I was not really in pain. Both Paul and Ken came to see me on the ward and so it was that seven days after having had what by any standard was “Major Surgery” I was on my way back home.

My understanding is that recovery from a “Sternotomy” can take 3-6 months yet within six weeks I was embarking upon a 30 hour journey to the South of Brazil. Yes I had some discomfort but certainly nothing to be unduly concerned about.

As for my heart I sometimes feel like responding by saying “What heart, I now don’t even notice it”! Prior to the operation it used to make its presence felt nearly every day, I could feel it, I could hear it and on occasions almost see it as it “bounced” about complaining at almost every beat. Today there is nothing, perfect peace. Thank you Paul, thank you Ken and indeed thank you to the whole team including Jaci who came to see me during my stay and thank you Liverpool Heart and Chest Hospital … THANK YOU.