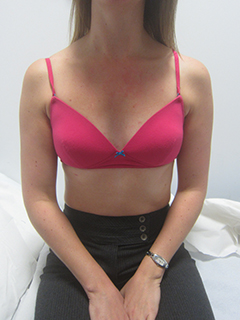 ““I have a near invisible scar which cannot even be seen in low cut dresses or a bikini.””

“I am a 36 year old mum of 2 small children and I had minimally invasive mitral valve surgery in 2011 under the care of Mr Paul Modi. I had this surgery at Liverpool Heart and Chest Hospital and the care I received both pre operatively in the clinic, during my short stay in hospital and afterwards was second to none and I could not recommend Mr Modi or the hospital more highly.

I have known about my leaking valve since I was 12 years old and always assumed that I would require open heart surgery, resulting in the traditional 12 inch scar along my breastbone and the subsequent 3 month recovery period, during which I would be unable to drive, work or most importantly care for my children independently. It was in February 2011 that I discovered the possibility that under the care of Mr Modi I could have this same procedure using a minimally invasive approach, resulting in a small 3 inch scar under my right breast. This meant only a 3 week recovery period which was fantastic and even resulted in me going on holiday after 4 weeks and walking around the battlefields of Hastings with my children, a feat that only a month before would have left me almost gasping for breath.

I was in hospital for only 5 days and once home I had help with the children for just one week and after that I was able to look after them myself. I took paracetamol for the pain, which was minimal, and I could not even believe myself that I had only a few days earlier had such major surgery. I should surely feel more ill !

Furthermore, and for women especially important, I have a near invisible scar which cannot even be seen in low cut dresses or a bikini, I could not have anticipated a better outcome. At the time of surgery to save your life anything which results in survival is acceptable, but once you come around from the anaesthetic and realise you have achieved this aim other aspects definitively take over and the shortened recovery and cosmetically pleasing results become much more important. This procedure means that now, 2 years post op, I not only feel so much better than I could have ever imagined but I have no reminder of the procedure, no scar to explain and have people feel sorry for me or question me about. I am back to being a 36 year old woman with a zest for life and 2 beautiful children to occupy me, how could I have asked for more?